Posted at 14:32h in Newsletter by Nanci Taplett

Marine fouling (biofouling) happens when organisms attach themselves to underwater objects like building structures, ropes, and especially satellite tags. Once attached to a tag, biofouling will inhibit a tag from transmitting a signal to Argos satellites. A tag with biofouling will also experience more drag, thereby reducing its hydrodynamic performance. Correctly applying an antifouling paint on your tag prior to deployment can definitely keep your tag going for years.

Antifouling is mandatory for good results on many species. Researchers should think seriously about antifouling any tag if the study animal is in tropical or temperate waters, a shallow-dwelling or slow-moving species or if the deployment will last a long time. Wildlife Computers tested many paints and, over time, has developed best practices that ensure the effectiveness of antifouling paints. One of the main causes of early tag failure we’ve seen is paint being absent or hastily applied, not following the manufacturer’s recommendations.

Here is an example of a badly biofouled tag. This tag traveled 5,970 km on the back of a loggerhead turtle named Marloo. You can read more about her story here.

We know companies change formulations so in November 2019 we initiated another round of testing. We looked at Micron66, Lightspeed, Propspeed, an unnamed competitive product, and a placebo. We painted the tags according to the manufacturer’s recommendations and secured it to a floating wharf in Northland, New Zealand. 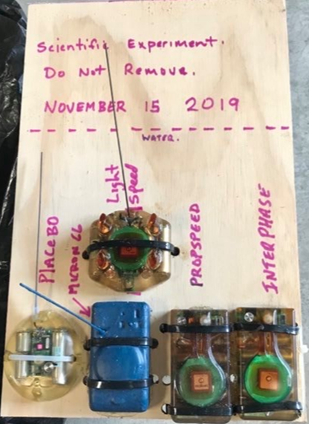 After just four-and-a-half months you can see the difference in antifouling performance.

The blue tag, painted with Micron66, showed no evidence of fouling, with Propspeed coming in second. Micron66 has been used successfully for over two decades to limit biofouling on sea turtle satellite tracking tags. Wildlife Computers has also seen great success with Micron66 limiting biofouling on its pop-up tags.

Wildlife Computers leaves the decision to antifoul tags after manufacturing and before deployment entirely to the researcher’s discretion, however, we strongly recommend that tags be treated with antifouling paint to ensure the best possible chance of a successful deployment. Even though the process of antifouling tags can add a few days of prep work to the deployment schedule, the results speak for themselves.

International Paints Micron66 is highly effective at providing protection whether animals are moving or not. Unique among anti-fouling paints, the acrylic copolymer formula of Micron66 with Biolux® reacts with saltwater to release biocide. Because the formula relies on a chemical reaction and not water friction, it’s a great choice for slow movers like sea turtles and whale sharks.

Tips and Tricks When Antifouling Your Tags

Wildlife Computers put together a list of resources to learn more about antifouling including a video on how to apply antifouling paint: https://wildlifecomputers.com/our-tags/extras/anti-fouling/