Posted at 13:28h in Announcements by Nanci Taplett 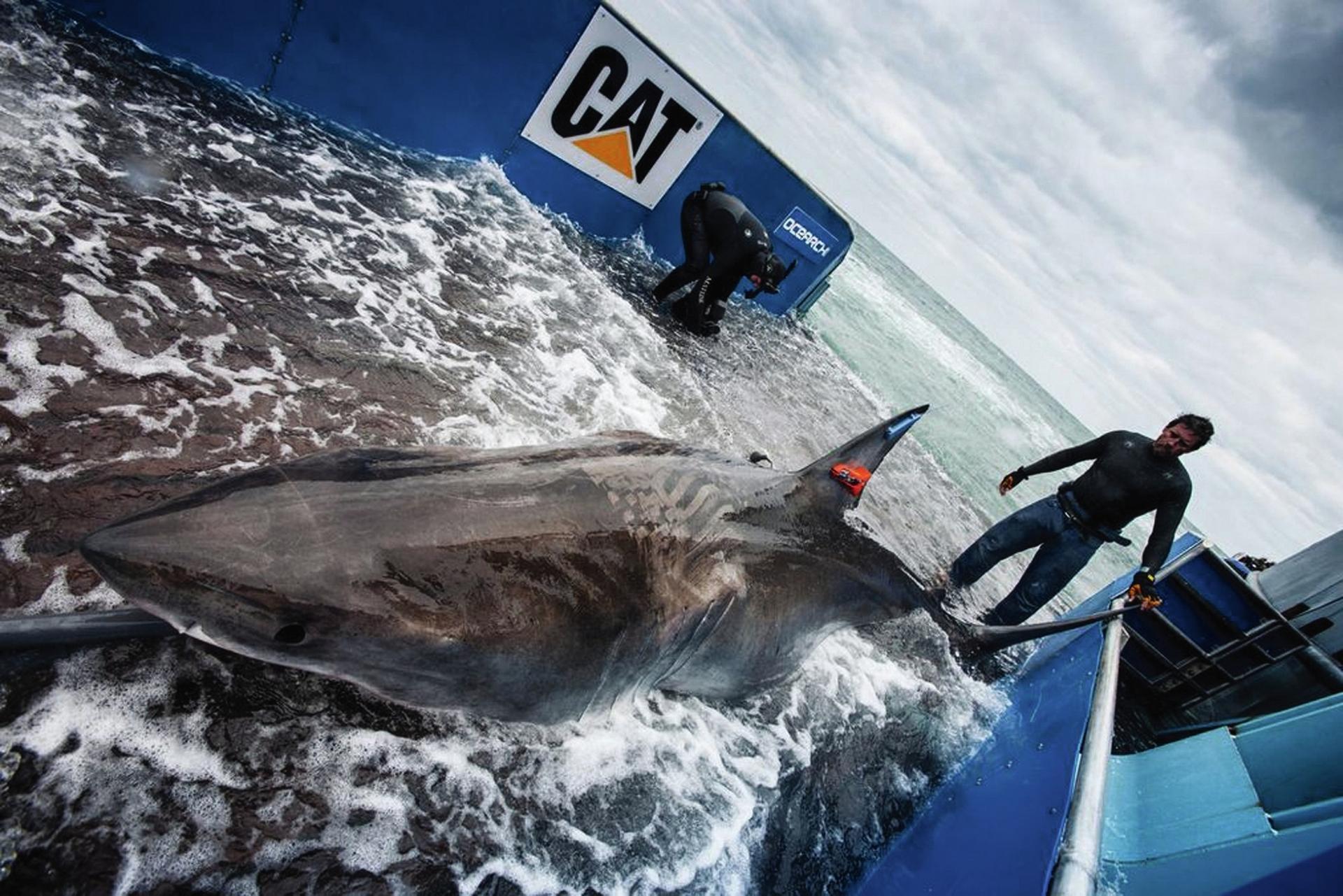 In March 2013, OCEARCH caught, tagged and released a 14.5-foot shark that was given the name Lydia. It was one of two animals that provided position data for the study.R. Snow/OCEARCH 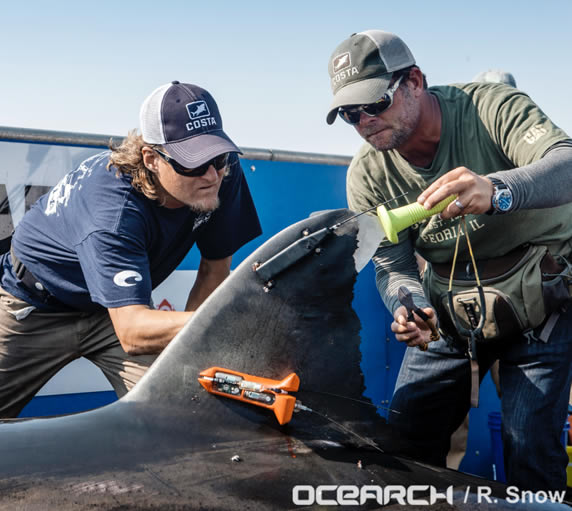 Co-author Chris Fischer uses a putty knife to protect the shark’s fin while attaching the tagging. Mary Lee, tagged off Cape Cod in September 2012, was one of two sharks analyzed in the study. The black tag on the fin transmits the animal’s position when it surfaces with an accuracy of 5 kilometers.R. Snow/OCEARCH

It’s always good to know where great white sharks are likely to be swimming. That’s true if you’re a nervous beachgoer, a fishing boat trying to avoid illegal bycatch, or a marine biologist hoping to conserve this vulnerable species.

A study from the University of Washington and Woods Hole Oceanographic Institution looked at the movements of adult female white sharks in the Gulf Stream and North Atlantic Ocean. Results showed, surprisingly, that they prefer warm-water eddies — ocean whirlpools that spin clockwise north of the equator — and tend to spend more time deep inside these slowly spinning features.

The open-access study was published in May in Nature Scientific Reports.

“We’ve decimated some open-ocean shark populations to a fraction of what they were 100 years ago. And yet we don’t know the basics of their biology,” said lead author Peter Gaube, a senior oceanographer at the UW’s Applied Physics Laboratory. “If we know where those sharks, or turtles or whales might be in the open ocean, then the fisheries can avoid them, and limit their bycatch.”

Gaube investigates how ocean eddies, or whirlpools, influence the behavior of marine animals. His previous study, on loggerhead sea turtles, similarly found that they prefer the anticyclonic, or clockwise-spinning in the Northern Hemisphere, eddies. These features trap large amounts of water at the ocean’s surface and are most often warm, clear and low in nutrients.

The new study analyzes movements of two female great white sharks tagged in September 2012 off Cape Cod and in March 2013 off Jacksonville, Florida. The tricky job of tagging the animals was done by OCEARCH, a nonprofit that focuses on tagging and tracking sharks. One shark just had a position tag, while the other had a second tag that also recorded temperature and depth. The sharks were tracked for nearly 6 years, with one still reporting its position regularly, as they swim north with the Gulf Stream and then out into the open ocean.

The high-tech tags are made by Wildlife Computers in Redmond, Washington. The early shark-tagging projects could just offer rough ideas of where sharks were swimming, Gaube said. But since precise satellite position networks were made available to the public, and with improvements in computing and batteries, the tags can now collect detailed information as sharks travel throughout the marine environment.

Researchers took the data from the two sharks and compared their position in the ocean with sea-surface height data from satellites showing where the huge, swirling warm- and cold-water eddies were located at that time.

“These eddies are everywhere, they cover 30 percent of the ocean’s surface,” Gaube said. “It’s like what you see if you’re walking along a river, and these eddies form behind rocks, but it happens on a different scale in the ocean: Instead of being a little thing that disappears after a few seconds, they can be the size of the state of Massachusetts, and can persist for months to years. You could be in the middle of an eddy in a ship and you’d probably never know it. The water may be a little warmer, and it could be a little clearer, but otherwise you wouldn’t know.” 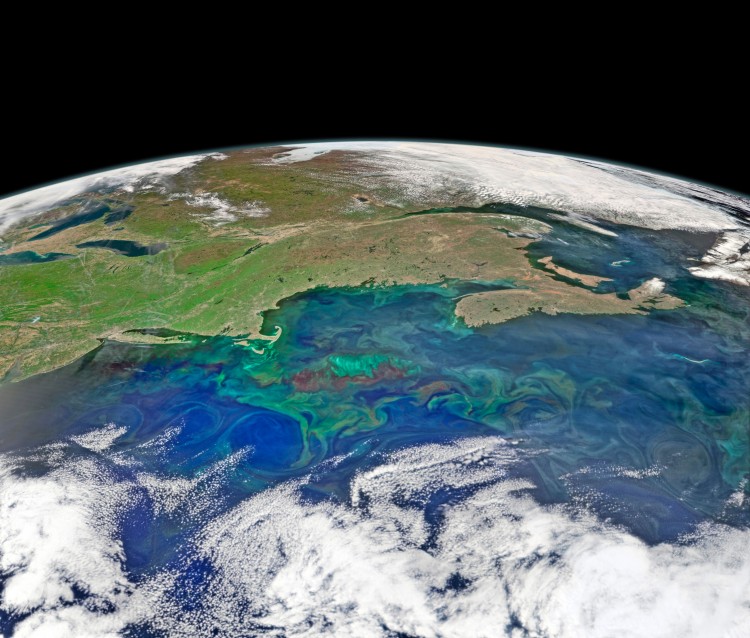 A satellite image of the North Atlantic Ocean in spring 2015. The swirls show the location of eddies, which have marine life that reflects green light. New research shows that great white sharks gravitate toward a certain type of these eddies.NASA Earth Observatory/Flickr

Analysis shows that the two sharks spent significantly more time in warm-water eddies than the cold-water eddies that spin the other way. Sharks lounged the longest at about 450 meters (about a quarter of a mile) deep inside the warm-water eddies, especially during the daytime, likely feeding on the abundant fish and squid at these depths. They were more likely to come to the surface at night.

This preference goes against common wisdom, because it’s the cold-water eddies that generally bring nutrient-rich water up from the depths of the ocean, and satellite images show that cold-water eddies are rich in marine plant life. This study is the first to show that sharks gravitate toward eddies, and that they prefer the warmer variety.

“White sharks are effectively warm-blooded,” Gaube said. “They have to keep their body temperature elevated. We believe that these warm eddies allow white sharks to forage longer at depth, where most of the biomass in the open ocean is found. One reason that the sharks might prefer them is by diving in these warm eddies, they can spend more time in the deeper water.”

Second, recent studies suggest that the “twilight zone,” below the depths that satellites can see, contains many more fish than previously believed — and much more than at the surface. Those patterns might be different than the ones we can easily detect from space.

“Could these ‘ocean deserts’ actually be super productive at depth? That’s what we think might be happening,” Gaube said.

Some recent deep-sea net surveys have found larger, toothy fish like pomfret below the surface in anticyclonic eddies, which could provide a motivation for the sharks to dive there.

“These sharks are 2,800 pounds. It’s hard to imagine that they’re just eating krill and small fish all of the time they’re in the open ocean,” Gaube said. “If they can find pomfret and lots of squid in these eddies, then sharks can really get a meal out of that.”

Data collected by sharks could help to protect this “twilight zone” as it’s just beginning to be targeted by major fisheries, Gaube said. And information about where great white sharks like to hang out could help conserve this vulnerable species.

“Maybe if we understand the biology of these animals, how they use these features, we could say, ‘OK, do not fish anticyclonic eddies during this time of year, because you’re more likely to catch white sharks,’” Gaube said. “Instead of cordoning off a particular area, we could say there’s this feature, it moves every day, let’s make a ‘mobile marine protected area’ and not touch it because we know it’s a hot spot for great white sharks.”

Other co-authors are Alice Della Penna at the UW; Camrin Braun, a former graduate student at Woods Hole who is now a postdoctoral researcher at the UW Applied Physics Laboratory; Gareth Lawson, Dennis McGillicuddy and Simon Thorrold at Woods Hole Oceanographic Institution; Gregory Skomal at the Massachusetts Division of Marine Fisheries; and Chris Fischer at OCEARCH. The research was funded by the National Science Foundation, NASA and the Woods Hole Oceanographic Institution’s Ocean Life Institute.