Posted at 14:31h in Newsletter by Nanci Taplett 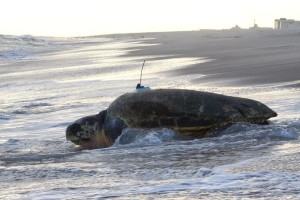 Queen, a 388 lb. adult loggerhead sea turtle was released in October and immediately went on the move. Queen was admitted to the NY Marine Rescue Center (NYMRC) in July 2021 for DTS (Debilitated Turtle Syndrome). Unfortunately, there is no known cause for DTS, and can be misdiagnosed as malnutrition, starvation, fatigue, and lethargy.

The awesome team at NYMRC helped Queen make a full recovery and was released after eight weeks of rehab. Before her release, Queen was equipped with a Wildlife Computers SPOT tag to track her post-release movement patterns. Since her release in October, Queen has stuck to the coastline and headed south. The data from the satellite tag are crucial as more data allows NYMRC to better understand post-release behavior for rehab cases like Queen.

If you are interested in learning more about NYMRC and its work with sea turtles, check out their website: www.nymarinerescuecenter.org, and remember if you see a stranded, sick, or entangled sea turtle please call the hotline at 631-369-9829.