25 Sep Filling in the Gaps: Augmenting Argos Coverage with Motes

Posted at 22:36h in Newsletter by Nanci Taplett

I think we can all agree that the Argos Satellite System is amazing and has revolutionized the fields of Marine Ecology and Biologging. The Argos system allows us to receive location estimates and behavioral data from animals positioned all over the globe…even when they are only at the surface for short periods of time. When this system is coupled with instruments and data products from tag manufacturers (like Wildlife Computers), researchers gain insight into where animals are going in the wild and what they may be doing when they get there. Insights that were literally unimaginable just a few decades ago. The downside of the Argos system is that the “pipeline” from tag to satellite (the amount of data that can be sent in each message) is fixed, and data transmission itself is limited by satellite coverage, which varies around the globe.

There are a number of ways to work with these issues to maximize the amount of data you receive; however, if you have a lot of data there is a chance that there will be gaps during your deployment—this is just an unfortunate side effect of the Argos system. These days, researchers want more than just the location of their animals. Ideally, they want to decrease data gaps while increasing the amount of resolution of data they receive. The only sure way to decrease gaps is to make sure satellites are overhead when you know your study animal will be at the surface. Because of the nature of the satellite system, this is impossible. That’s why Wildlife Computers developed Motes. Motes are designed to augment the Argos system and improve data throughput from tagged animals. It is like having your own personal satellite that you can place where you know your animals may be (e.g. haulout sites, known foraging areas, transit corridors, breeding grounds, etc.).

Motes are stationary, unattended, ground-based listening stations that continually log telemetry data from satellite tags that come within range of the Mote itself. Reception distances of over 55 km have already been observed for Motes, but the range for any particular Mote depends on its placement and view of the area where tags will surface. They can be deployed without any existing infrastructure, they will continually log data—even when no satellites are present, and they are “always online” meaning they can receive up to 100% of messages sent from within the Mote’s range. When compared to satellites alone, this results in a 3-5x increase in data message recovery! Motes also work with any tag that transmits data. They are non-discriminatory and log any type of Argos-intended messages from any PTT within their range. Data are then encrypted and transferred to the Wildlife Computers Data Portal where they are merged with data received via Argos satellites. Since Motes are non-discriminatory, they have the potential to increase opportunities for collaboration between research groups that have a common interest in telemetry data. 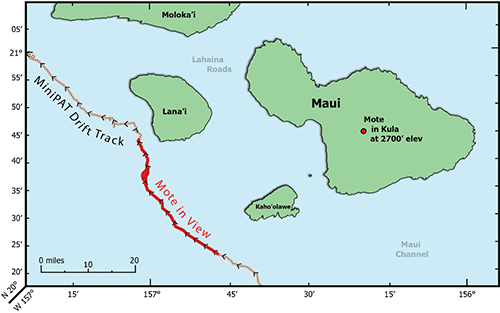 The image shows a drift track of a Wildlife Computers MiniPAT off the coast of Maui, Hawaii. After releasing from an Oceanic Whitetip shark, the continually transmitting pop-up tag floated by a Mote stationed 2700’ up the side of the Haleakalā volcano on Maui.

The tag was in view of the Mote for 43 hours as if drifted by. During that time, 1728 transmissions were detected by the Mote. In the same period, Argos satellites picked up only 480 messages. This is just one example of the Mote’s utility, which is highlighted in more detail in Jeanniard-du-Dot et al (2017). Currently, researchers have successfully deployed Motes in the high arctic, Hawaii, the Channel Islands, British Columbia, and Australia. They have also been mounted on the top of ships that are near tagged individuals and will be tested in a NASA weather balloon next month. Each Mote is custom built to fit the requirements of your field site and can be used in remote or civilized locations.

Dr. Kenady Wilson is one of our Wildlife Computers resident biologists and data whisperer whose research focuses on quantitative applications for telemetry data. Dr. Wilson is the developer of new analysis methods for telemetry data and author of several research publications including her latest Estimating animal utilization densities using continuous-time Markov chain models. Her publications include work with Stellar sea lions, Harbor seals, and Hawaiian monk seals. She holds her Ph.D. from Duke University. She likes being outside with friends and family and hates it when people put nuts in baked goods.