Posted at 00:26h in Newsletter by Nanci Taplett 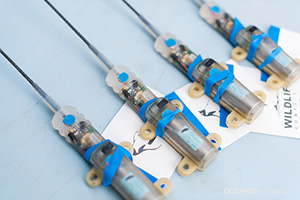 A new study undertaken by the University of Washington and Woods Hole Oceanographic Institution utilized Wildlife Computers SPOT tags to look at the movements of adult female white sharks in the Gulf Stream and North Atlantic Ocean.

“The new study analyzes movements of two female great white sharks tagged in September 2012 off Cape Cod and in March 2013 off Jacksonville, Florida. The tricky job of tagging the animals was done by OCEARCH, a nonprofit that focuses on tagging and tracking sharks. One shark just had a position tag, while the other had a second tag that also recorded temperature and depth. The sharks were tracked for nearly 6 years, with one still reporting its position regularly, as they swim north with the Gulf Stream and then out into the open ocean.”