Posted at 16:13h in Newsletter by Nanci Taplett 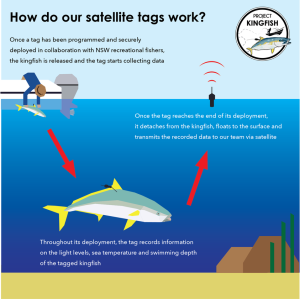 Project Kingfish recently had its first successful Sydney satellite tag deployment. How does their program work?

Work has now begun on reconstructing the track of the first full kingfish track and the project will share results soon.

Tag Agent administers all our tags excluding the following: