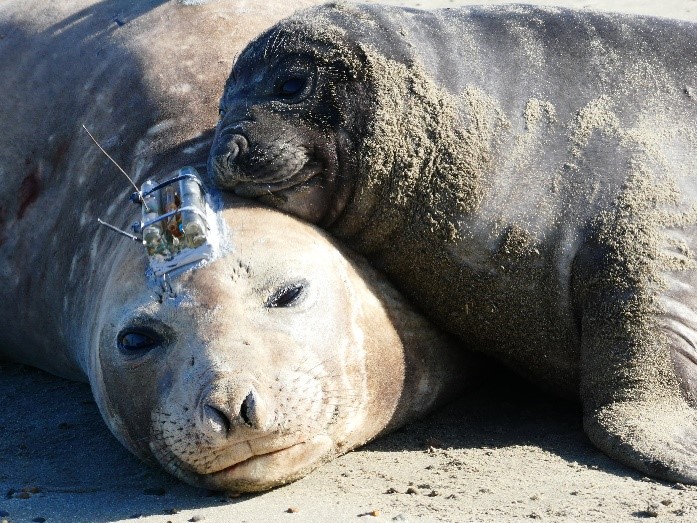 Posted at 08:29h in Announcements, Newsletter by Nanci Taplett

Globally, there is increasing concern over changes in ocean health and climate. Researchers are continually looking for innovative ways to observe basic oceanographic parameters to monitor those changes. Marine animals are well-suited for monitoring ocean conditions beyond the reach of ships and profiling buoys as they travel all ocean realms, and in many cases, are the only visitors to remote, bathyal, and ice-covered regions.

After many years of innovation and development efforts, our prototype tag—Scout-CTD—is successfully measuring and transmitting temperature and salinity profiles during field deployments on free-ranging marine animals.

Using animals as oceanographers is certainly not a new idea. While some of the first electronic tags were developed in the 1960s to study diving Weddell seals in Antarctica (Kooyman 1966), the field of biologging and biotelemetry and the application of the tags to study the physical and biological properties of the oceans really took off in the early 2000s. The advent of miniaturized electronics and sensors, and the launch of the Census of Marine life’s Tagging of Pacific Pelagics (TOPP) Program, helped move the field forward while spawning numerous regional electronic tagging studies all over the world. Now, biologists, oceanographers, and engineers are working together to develop sophisticated archival and satellite-linked tags that can be carried to the remotest parts of our oceans and provide new information on its health.

Our prototype SCOUT-CTD tag archives salinity and temperature profiles at fixed depths from the ascent of the deepest dive during a user-defined summary period. It uses a platinized electrode for conductivity measurements and a high-precision thermistor for temperature. Accurate positions acquired using Fastloc® GPS accompany each of the sampled profiles. The profiles with their corresponding GPS locations are transmitted via the Argos satellite system. The Scout-CTD provides data similar to that of the widely-used, inductive-cell, Argos satellite-linked CTD tags developed by Mike Fedak and the Sea Mammal Research Unit (SMRU) at the University of St. Andrews. We worked with a contractor who specializes in manufacturing oceanographic instruments to provide us with calibrated, precision sensors for temperature and conductivity. A recent proof of concept study showed comparable data from Wildlife Computers and SMRU CTD tags deployed on bowhead whales off the west coast of Greenland (Teilmann et al. 2020).

In addition to the bowhead whale study, our prototype SCOUT-CTD tags were deployed on narwhals off eastern Greenland and on southern elephant seals off Patagonia, Argentina. Heide-Jørgensen et al. (2020) used Wildlife Computers SCOUT-CTD tags to link ocean conditions with presumed feeding behaviors of narwhals in Scorseby Sound, an area where CTD profiles had not been collected since the middle of the last century. They found that foraging narwhals preferentially selected cooler, higher-salinity waters at depths greater than 300 m in the Sound or coastal waters, and avoided warmer Atlantic waters farther east. The whales had a rather narrow temperature niche of about 0.6° C to 1.7 °C, which may put them at risk in the face of rising ocean temperatures.

The southern elephant seal, with its enormous size and fidelity to specific rookeries, has been a workhorse for testing new instrumentation. Christophe Guinet and his team equipped three southern elephant seals with our prototype SCOUT-CTD tags at Península Valdés, Argentina. The seals migrated hundreds of kilometers offshore during their post-breeding molts before returning back toward Península Valdés (or, in the case of one seal, making a side trip to the Falkland Islands) a couple of months later. The southern Atlantic Ocean off Argentina is an area with dynamic ocean conditions, characterized by the confluence of the northward cold Malvinas Current and the southward warm Brazil Current. As the seals passed through several different water masses during their migrations, the SCOUT-CTD tag captured the wide range of temperatures and salinities the seals experienced.

Figure 2—The track of a southern elephant seal tagged with a prototype SCOUT-CTD tag at Península Valdés. The seal migrated east over the course of a month into an area with high salinity, warm-core eddy formed by the Brazil Current before turning back toward the coast. The SST image is from the midpoint of the migration. While temperatures warmed over the two-month period, warmer, low-salinity water near the coast, the northward cold-water current in the center, and warmer high-salinity water offshore were persistent throughout the track. Colored triangles on the map indicate the locations corresponding to the profiles in the right panels.

While the prototype SCOUT-CTD tags provided accurate temperature and salinity measurements for up to 10 months in early trials, we are continuing our research and development to identify and characterize the potential effects of biofouling on the conductivity sensor and resulting salinity measurements. To date, the deployments have been in regions where the water temperature was quite cold likely limiting bioaccumulation on the exposed sensors. We also suspect that oils from the environment or from the animals themselves can affect the conductivity readings. Regardless, we are encouraged by the outstanding performance of the tags so far!  Stay tuned as we complete our development work. We hope to be able to add this to our product line in 2021.

Suzy Kohin joined Wildlife Computers in June 2018. Kohin holds a bachelor’s degree in Math and French from Washington University in St. Louis and a Ph.D. in Biology from UC Santa Cruz. Kohin’s research includes analyzing and applying electronic tagging data to questions regarding habitat-use, foraging ecology, population structure, survivorship, and fisheries management. At Wildlife Computers, Kohin interacts with researchers about their needs and helps investigate novel ways that tagging technologies can advance science and conservation efforts. Suzy has published extensively in fisheries, quantitative ecology, and physiology. You can find a full list of her publications here