Posted at 22:25h in Newsletter by Nanci Taplett 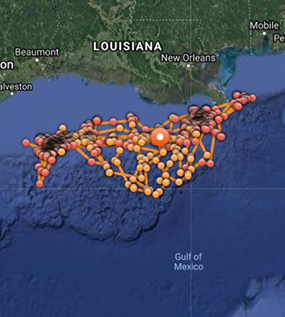 The story of Peggy Hughes is an interesting one. Peggy Hughes is the largest Mako shark ever tagged by the Center for Sportfish Science and Conservation (CSSC) in the northern Gulf of Mexico. The shark was tagged during an expedition last summer. Not much is known about the Makos in the Gulf of Mexico “because their speed and migration patterns make them hard to study.” Being a large female Mako makes Peggy a great study subject.This incredible Mako shark weighs in at over 1,000 pounds. Ph.D. candidate, Kesley Gibson, had the honor of crawling onto the back of the shark and fitting her with a SPOT-258 tag. A typical SPOT tag (smart position and temperature tag) regularly sends satellite signals when a shark surfaces the water and reports on location and water temperature. 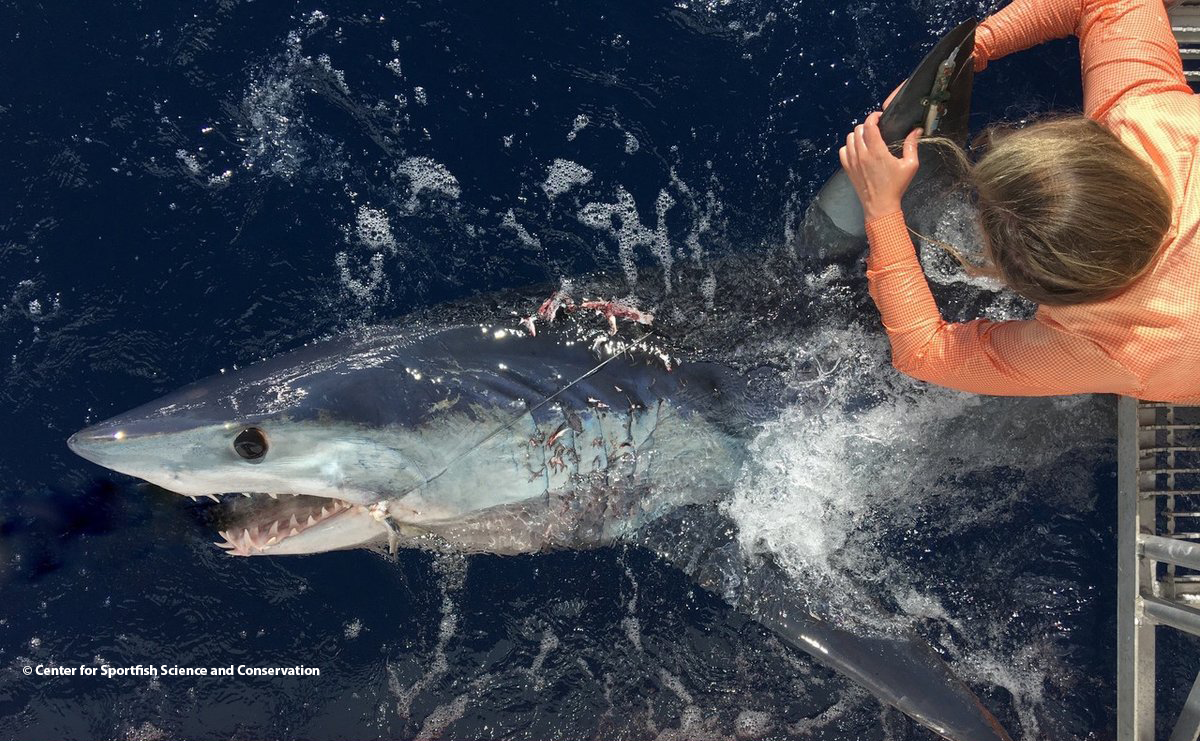 From an article posted on the Harte Research Institute for Gulf of Mexico Studies, Gibson spoke about what it was like to tag Peggy Hughes, “It was the first time I’ve laid down on top of a shark to tag it, and she was twice as big as me. Up close, these sharks are gorgeous, but they’re powerful too. If she’d have decided at any point she didn’t want the tag we’d be done.”

We recently spoke with Kesley to learn even more about the project.

Tell me about the overall project? How many sharks were tagged? What data are you trying to capture?

The goal of this project is to determine fine- and large-scale migration patterns of sharks in the Gulf of Mexico, including shortfin Mako sharks. To date, we’ve tagged 19 sharks for this project. Four SPOT tags have been placed on shortfin Mako sharks with the goal of placing at least seven more tags this year. Currently, very little is known about the migration patterns of shortfin Makos in the Gulf of Mexico or how, and if, they use artificial reefs during their migrations.

Tell me about Peggy Hughes.

Peggy Hughes is the largest Mako shark we have tagged to date and the largest that we know of tagged in the northern Gulf of Mexico. She was over 11.5 feet long and was estimated to weigh over 1,000 pounds. Since tagging Peggy Hughes in March 2017, the data shows she stayed along the continental shelf moving from the Flower Garden Banks to the Mississippi Canyon. She has stayed in the Gulf of Mexico, unlike another Mako we tagged, Harvey, who leaves the Gulf in the summer and heads to the Caribbean Sea. We hope to tag additional shortfin Makos to see if these movements are observed in other individuals as well.

What tags are you using? How did you tag the sharks?

We use SPOT (5 and 6) tags for all our sharks. We tag sharks by bringing them alongside our vessel. This tagging video of Harvey shows the technique more closely. https://www.youtube.com/watch?v=vzNoA6PJ2RY&t=16s.

Peggy Hughes was not videoed during tagging as she was tagged off a head boat (the Scat Cat of the Fisherman’s Wharf in Port Aransas, Texas). Because she was so large and could not be brought on the vessel with us, we brought her next to an affixed platform on the side of the boat. This had the added benefit of leaving her in the water during the tagging event to keep the water flowing over her gills.

What’s the one thing you would want people to know about the sharks or the project?

This project is currently ongoing but these sharks are important to the marine ecosystem. They are the “balance keepers” of the ocean. Tracking these sharks will inform scientists about their migration patterns and habitat use in the Gulf of Mexico that we hope will lead to improved conservation efforts of these majestic apex predators.

Keep an eye on Peggy, Harvey, and more sharks on the CSSC website. You can also download the Shark Tracker app on your phone.