Posted at 08:12h in Newsletter by Nanci Taplett 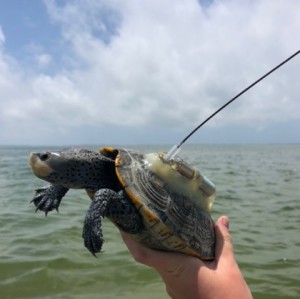 The diamondback terrapin is a “small estuarine turtle distributed along the Atlantic and Gulf Coasts of the USA that is threatened by drowning in crab pots, road mortality, exploitation in the pet trade, and habitat loss.” This study is the first time the diamondback terrapin was studied using satellite telemetry as tags were previously too large for this species. “After talking with our Wildlife Computers technical sales consultant, he suggested the SPOT-275 even though it was originally designed for penguins. It was small enough to deploy on adult female terrapins,” said Meg Lamont, Ph.D., Research Biologist, USGS Wetland and Aquatic Research Center.

They deployed SPOT-275 tags on two adult females. The terrapins were tracked for “146 and 147 days, and the total distance traveled for each terrapin was 70.1 km and 723.0 km, respectively.”

“We were excited that these tags worked. Terrapins forage in the water like sea turtles, but they tend to come onshore to do more than just nest. They may rest and probably thermoregulate and regulate salt content. They typically rest in salt marsh habitat which contains dense vegetation. We weren’t sure the tags would transmit well in that habitat and we’ve been pleasantly surprised,” continued Lamont. “We were also surprised about tag life. For seven terrapins, we have a mean 187 days tracking duration. You list 171 days on your web page so we averaged 10-11 days longer. We had two tags go over 200 days and one go to 188 days.”

The data the team received also led to a big revelation. “The biggest surprise we’ve gotten from the data itself is one terrapin that moved 70 km from her capture location. It was previously believed that terrapins don’t move more than 10 km but this terrapin proved everyone wrong!”