29 Sep Why Did My MiniPAT Tag Release?

Posted at 13:32h in Newsletter by Nanci Taplett

One of the most common questions we get from researchers is “Why did my MiniPAT release?” This can be a tough question to answer because reasons can vary. The best way to find out the root cause is to dig into the data and how the tag was programmed.

The Tag Release Sequence in the tag programming identifies a couple of scenarios where you, as the researcher, can choose when and in what circumstances a tag may release. Pictured here, you see our standard MiniPAT release sequence. Release sequences differ significantly depending on species and project goals. It is important to keep in mind how your tag was programmed to determine why a tag release was triggered when looking through your data. 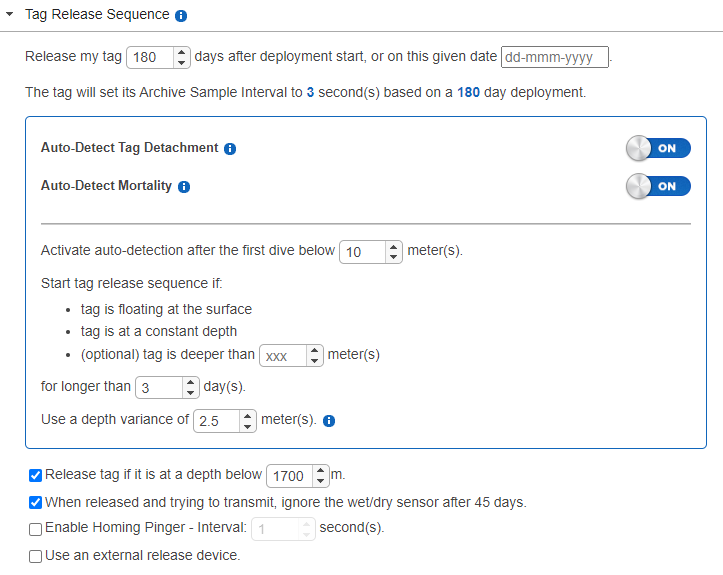 When a MiniPAT initiates the release sequence, it signals the release pin to begin corroding. Corrosion time is dependent on water temperature and salinity but, under typical conditions, it takes 8-12 hours. When the tag reaches the surface and begins transmitting through Argos, the release reason is reported in the Wildlife Computers Data Portal’s Deployment Summary, as well as the Status.csv and the Summary.csv spreadsheet files. These are designed to give a quick overview of why the tag released, but a closer look at the data can help show the circumstances that led to the tag’s release.

The release reasons are briefly explained in the Spreadsheet File Descriptions document. The examples here are based on time-series depth data for various (truncated) MiniPAT deployments, but you can infer similar circumstances by looking at other depth-based products or even looking at temperature readings to determine where in the water column the tag was likely spending the last days of its deployment. The yellow circles on the graphs indicate the point at which the tag triggered the release sequence and began to corrode the release pin.

Interval—the release reason reported when a MiniPAT tag met the programmed number of days of deployment. The tag will begin burning the release pin at UTC 20:00 on that final day. The tagged animal was likely still alive if your tag reported this reason and the premature release features were enabled.

Date—the release reason reported when a MiniPAT tag met it’s programmed release date. The tag begins burning the release pin at UTC 20:00 on the final day and the tagged animal was likely still alive at the time of release if the premature release features were enabled.

Premature—premature release is based on the “Auto-Detect Mortality” function. This programming looks at how long the tag stayed at the same depth. This feature helps infer a mortality or attachment failure, and can be changed or even disabled (such as for benthic species which do not move vertically much). 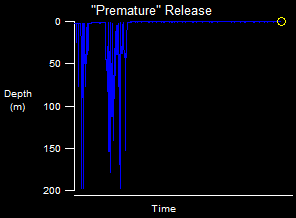 This example is a fairly typical depth-time series for a premature release. There was either mortality and the animal floated to the surface, or the attachment failed and the tag floated to the surface. Once on the surface for the programmed number of days, the tag met its criteria for “floater” detection and triggered release. 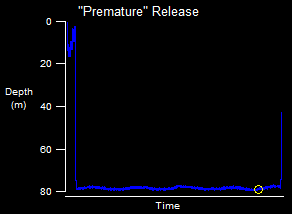 This example shows tidal cycles on the seafloor. The programmed depth variance specifically accounts for tidal fluctuations and helps the tag detect it wasn’t changing depth and trigger its premature release detection. The animal either experienced mortality and sank, or the attachment failed, weighed down the tag, and sank. It is extremely important to test the buoyancy of the tethered MiniPAT tag prior to deployment. 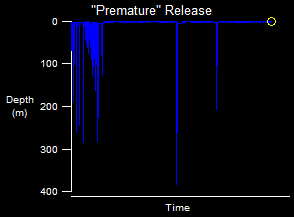 This example shows possible predation attempts on the deceased animal or tag. In cases like this, predation can cause the tag to be at the surface much longer than its programmed interval for detecting early detachment/mortality.

Floater—this indicates the MiniPAT was floating on the surface long enough to meet its programmed premature release conditions. Reporting as a “Floater” requires the Wet/Dry sensors to measure less than 50 percent wet or measure <1-meter depth for the duration of the release interval. If the tag floats on the surface but reads more than 50 percent wet and/or >1-meter, it will instead report as ‘Premature,” assuming it stays within the programmed depth variance. Floaters can be indicative of mortality or attachment failure. 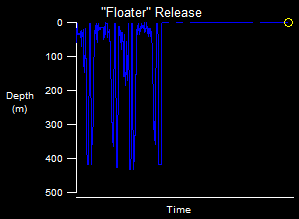 Too Deep—All MiniPAT tags are physically tested to 2,000 meters—we don’t test below this depth. By default, MiniPAT tags are programmed to begin burning the release pin when they detect a depth of 1,700 meters or deeper. This ensures that the release pin will corrode and release from the animal before it reaches crush depth. A “Too Deep” release reason is reported in this case. This might be indicative of mortality, predation, or attachment failure (tag weighed down by a too heavy tether). 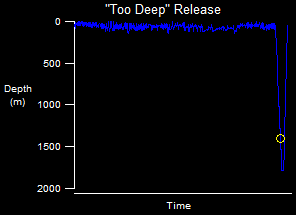 This Too Deep release was triggered when the tag hit 1,400 meters. The tag kept sinking as the release pin corrodes. Once the pin corrodes through, the tag floated to the surface. Either there was mortality and the animal sank, or the attachment failed and was dragged down by a heavy tether.

Pin Broke—this indicates the release pin broke before the MiniPAT completed its deployment duration and the tag floated to the surface. With our current design, there are extremely low rates of these messages, usually only occurring on larger, more athletic fish species as they put far greater stress on the release pin.

Once you dig into the data, you should be able to get closer to the reason why your MiniPAT tag released from your animal. If you need further assistance, feel free to contact your technical sales consultant at tags@wildlifecomputers.com.